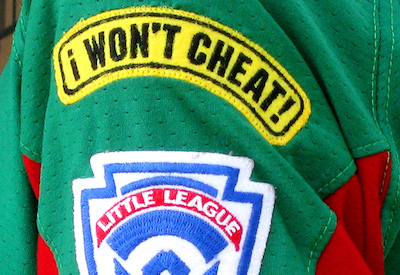 Youth sports are supposed to be great ways for young athletes to engage in a healthy, competitive activity while making friends and learning good life lessons.

However, there are some parents and coaches who decide to make things all about themselves, youth sports cheating “for their children” by staking teams or twisting the rules to their benefit. While the adults and coaches may claim the cheating was done for their children and players, it is often clear that the adults themselves are the ones seeking the glory, not being kind to their young charges.

A perfect, recent example of this took place during the 2014 Little League World Series. Those in charge of inner-city Chicago’s Jackie Robinson West team purposefully recruited players from outside their boundaries, allowing them a wider array of players to choose from, but denying children within the proper boundaries the chance to make the team. Not only that, but when the cheating was discovered, and the blame was rightfully placed on the parents, the children had to endure the shame and questions about whether they knew the cheating had occurred or not.

Because the parents in charge of the team wanted to live vicariously through their children, their young charges had their sense of accomplishment over a job well done taken away, due to the fact that their team had operated outside of the rules. Thanks to the parents, the players will forever have to live with being known as the team that only won due to cheating, whether that is fair or not. Does that sound like the type of thing that parents who cared only about the accomplishments of their children would do? Participants in youth sports often look up to coaches as role models and attempt to emulate their actions. If cheating is what a coach does, it sets a pretty bad example for his or her players.

This is why it is important for parents and coaches to remember that while winning is a great feeling, it doesn’t necessarily have to be the ultimate goal when it comes to youth sports. No matter how tempting bending the rules may be, winning the correct way will always feel better in the end, for both the players and adults.