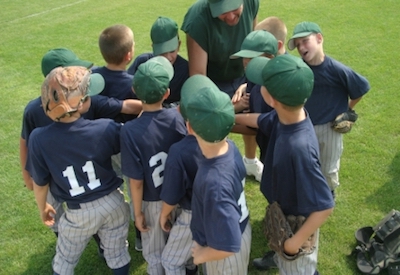 Competitive youth sports have a long history of being popular activities for children to participate in outside of school.

Upon the passage of a law in Mississippi in 1917 that made school compulsory, all 50 states now had mandatory education. This gave rise to the concept of “free time,” during which children were free from the obligations of learning. As previously mentioned, middle-class children initially spent their free time learning the arts and similar things, but eventually moved into youth sports when it became acceptable. Sports were seen as important in teaching the “American” values of cooperation, hard work and respect for authority.

Once this movement began, organizations took responsibility for providing children with athletic activities. The first such group was New York City’s Public School Athletic League (PSAL) for Boys, founded in 1903. Interschool athletic competitions in basketball and track and field were established, giving youngsters the chance to play against their peers in fun contests. By 1910, 17 other cities across the United States had formed their own competitive athletic leagues modeled after New York City’s PSAL.

Unfortunately, during the Great Depression, many leagues suffered financially, causing them to close down. This resulted in the establishment of fee-based groups, like the YMCA, which many lower-class children could not afford to participate in. Thus, the dominance in youth sports shifted from lower-class children to their middle-class counterparts. While some elementary schools had free programs, many of these died out due to a mixture of being faced with better fee-based programs and fears that competitions were having bad effects on children.

Nowadays, there aren’t that many free youth sports programs left. The majority are fee-based, and while some accommodations are made to those who cannot afford to play, it is clear that things are far different from how they used to be in the early 1900s.

If you want to train at a sports training facility that will prepare you for competitive sports or help you improve then find out more about STACK Sports in Mahwah, NJ.